“When I lived in Barcelona, it never felt like Spain to me” 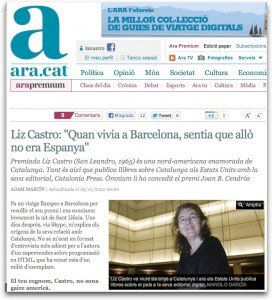 (I recently was interviewed in one of Barcelona’s principal newspapers, Ara, by Adam Martín. Here’s my translation of the article into English.)

Prize-winner Liz Castro is an American woman in love with Catalonia. So much so that she publishes books about Catalonia in the United States with herpublishing house, Catalonia Press. Òmnium recently awarded her the Joan B. Cendrós prize.

She made a quick trip to Barcelona to collect her prize and we met briefly on the night of Santa Llúcia [the awards ceremony]. A few days later, via Skype, she explains how she came to know Catalonia. I can’t think of a more appropriate format for an interview of the author of a bestseller on HTML programming which has sold more than a million copies.

I’ll tell you the story, but it’s kind of long. My great-grandparents were from Andalusia and immigrated to Hawaii in 1907 to work in the sugar plantations. The two families met on the boat, worked in the same places and then later moved to the same town in California [where I was born].

So you have roots on the Peninsula.

Yes. And all my life I wanted to learn how to speak Spanish, because I wanted to conserve something of my father’s family. And when I went to college, I studied Spanish. And then found myself in a Catalan class.

In a university in California?

Yes, with a professor from Brazil, funny, huh? And he was very Catalanist: he made us read the Avui newspaper [the first Catalan language newspaper begun after Franco died], and sing “Baixant de la font del gat” [a Catalan nursery rhyme song] and even Els Segadors [the Catalan National Anthem]. And he told us a lot about linguistic policy. At the university I also studied a fair bit of sociolinguistics, and I was very interested in bilingualism, figuring out why, when there is more than one language, one is used more often than the other.

And you had never been to Catalonia?

I had been in Spain a few times, in Madrid, and I had spent a week in Barcelona, but I didn’t know much about it. I did come in contact with Catalan, but in a very superficial way: at the house of some friends of a friend and they were watching Dallas in Catalan.

Why did you fall in love with Catalan?

I attended the Summer Catalan University in Prada [set up during the Franco era so that Catalans could keep studying about Catalonia and in Catalan], sort of by accident, and I was really blown away by the sense of identity, of nation that people had: they knew who they were. Maybe I was looking for that. I wanted to know more. I was 21 years old. And I remember that people treated me like a movie star: “An American who speaks Catalan, that’s awesome!” they said. That was in 1986, when they’re weren’t that many of us [Catalan speaking foreigners].

And then you moved to Barcelona.

I had $800 saved up, and I packed my things and decided to move to Barcelona. I estimated my savings would last for about two months. I didn’t want to be a tourist there, I wanted to be part of the city and live like a Catalan. I found an apartment in Vallcarca and then found work right away in a Macintosh software start-up, also by accident. And all of a sudden, I had enough money to stay for longer than two months.

What surprised you most about the city?

I didn’t understand when people slept, because we went out every night. And the schedule, in general. I sang in the Orfeó Català [a choral group] and our rehearsals started at 9:30 pm! In the US, that would be absolutely unheard of, no-one goes out for a rehearsal at that time of night! And I also realized how social everyone was: they spent hours and hours chatting, at lunch and at dinner, and after lunch and after dinner, the sobretaula. [Sobretaula is the Catalan word for the time you stay at the table and talk after you finish a meal.] In English we don’t even have a word for that.

How long were you here?

Six years. During the last three, I ran a small publishing house for which I found interesting Mac related books, secured the rights, had them translated into Spanish, and then sold them all over Spain. And then a publishing house in the US offered me a job in the US and I decided to go home.

Your ties with Catalonia continued?

Well, I brought a husband home with me, and he’s from Barcelona! [laughs]. We have three kids and we return each year and make an effort so that they speak Catalan. Last year we spent the whole year in Catalonia so the kids could go to school there and really learn the language well.

And how did you start publishing digital books about Catalonia in a market that seems a priori not very interested?

It is and it isn’t. Everyone I know probably knows more about Catalonia than they might have chosen to if they didn’t know me… But now there are lots of tools for spreading information! Facebook, Twitter. It just seems so unfair what happens in Catalonia. People from the US go there and they don’t have a clue what Catalonia is about. One of the things that I felt when I lived there was that it wasn’t Spain, Spain was someplace else. Madrid was Spain, but not Catalonia.

How can digital books and the internet help?

They make tools available that help every person be able to tell his or her own story, and explain whatever they want. The gatekeepers are disappearing; you don’t have to convince anyone to publish what you’re thinking about, you can do it yourself.

What have you published with Catalonia Press?

Two books: one by Matthew Tree, Barcelona, Catalonia and one by Toni Strubell and Lluís Brunet, What Catalans Want. Now the access to publishing is so much simpler and I can help people know Catalonia much better. It’s a small thing that I can do. And I need to. A few days agao, there was a terrible article about [the budget and] the autonomous communities in the New York Times. Whoever wrote it had no idea what they were talking about!