“a fine introduction to life in Barcelona and Catalonia” 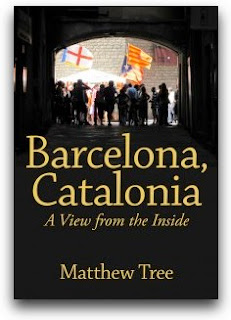 Colm de Búrca, an Irish writer, wrote this review of Matthew Tree’s “Barcelona, Catalonia”, but couldn’t post it to Amazon because he hasn’t ever shopped there.

I got “Barcelona, Catalonia – A View from the Inside” some time back, and have been meaning to write some thoughts on it ever since. This book is a collection of essays and articles published by Matthew Tree over a period of several years, from 2006 to 2010. As such, it is the sort of book that you dip into from time to time, and usually skip over bits as you would if you were reading a newspaper. However on this occasion, I read the whole book, and more surprisingly, I read it over a period of a few days.

The book mainly deals with Catalonia, and as the bulk of the book was originally in the form of a weekly column in an English-language newspaper in Barcelona, it relies heavily on his life including his visits to England and elsewhere.

The author has lived most of the last 30 years in Barcelona, and from day one started to learn Catalan, rather than Spanish. As a result, he identifies with Catalonia rather than with Spain, and these parts of the book are what I found most interesting. Tree tells us, for instance, about the difficulties various Catalans have had with (the rest of) Spain. There was a case of a taxi-driver in Madrid who threatened to throw a woman out of his taxi for speaking Catalan on her phone; a man who was threatened in Saragossa because his car had Catalan number plates; areas where Catalan, the native language, is not allowed to be taught in the schools; right-wing violence, particularly in Valencia where it takes the form of a crusade against the Catalan language and its speakers. One article tells of torture by the Guardia Civil in 2007 and 1988. On the earlier occasion, this charming “civil” body threatened university Carles Castellano that they would “gang fuck your Catalan whore of a wife”.(p. 80)

As a writer, literature is obviously an important part of Tree’s life. He deals with various authors, including: Quim Monzó, who is probably the best living writer in Catalan, and definitely the best known of them; Jordi Cussà, an ex-heroin dealer and addict who has written a whole range of books since the year 2000 on themes that vary from a novelised version of his own experiences with drugs, to sci-fi, a historical novel, and the Bosnian war. And of course there is the poetess Dolors Miquel, and her irreverent poems in prayer form. Tree gives us part of her version (in translation) of the Hail Mary – “Our mother who is in rut/ hallowed be thy cunt” (p. 69)

Other themes deal with the integration of immigrants into Catalan society, along with incidents of racism. On integration, Tree has a good article on Yacine Belahcene, a musician with Algerian roots, and his band Nour; and where racism is concerned, there is Tree’s own eye-witness account of a black man being accused in a bar of robbing a woman’s phone – which was then found by the barman in the toilets.

His critical eye also deals with his own country, England, and doesn’t hide how much he despises the English establishment. This is dealt with particularly well in an article that mentions a toilet in Oxford University that was (literally) covered in shit, a subject too delicate to be spoken about on the University intranet, and apparently too delicate to clean either (p. 132).

In brief, this is a great book. I won’t use the word “enjoyed” as many of the matters dealt with there are anything but pleasant, but it is as a fine introduction to life in Barcelona and Catalonia that you are likely to find – with plenty of extraneous gems thrown in for good measure.